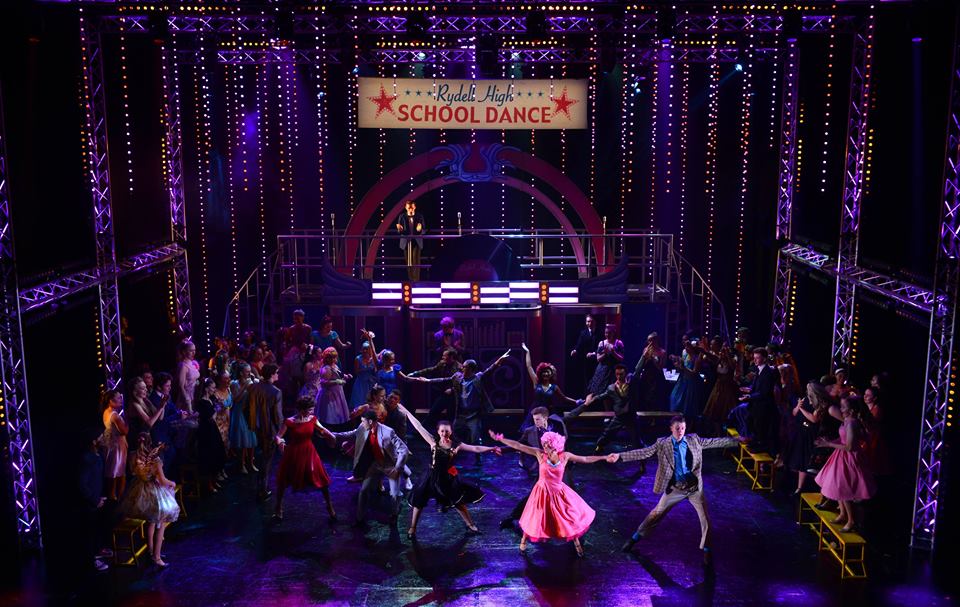 There can’t be many people that haven’t seen or heard of “Grease”. As well as the classic movie there’s been numerous stage productions, reality TV shows and most recently a live TV version. So the danger with a new production is always to bring something new or not to disappoint. Well fear not – both are most definitely covered here.

Stage Experience never disappoints. It’s always a joy to watch this young cast present their summer musical and for their 13th they bring us Grease and it most certainly wasn’t an unlucky number. From the moment it started with a beautiful “Sandy/”Danny” duet to the moment it ended with a crowd-pleasing mega-mix it never missed a mark. With a huge cast of 120 it felt like there was an entire high school on stage! It was also a novelty to see the characters actually played by teenagers. In the film the average cast age was 30 with Stockard Channing (Rizzo) clocking in at 34!

It feels unfair to single out any of the cast as they’re all wonderful and really throw themselves into their roles. There are some stand-out moments however. The electric opening of title number “Grease” was goose bump inducing. There was some fantastic dancing from the T-Birds in “Greased Lightning” (especially from one flic-flacking little boy). Georgia Anderson as Sandy delivered a gorgeous version of “Hopelessly Devoted To You”. Miss Anderson is definitely one to watch in the future. Sofi Robinson as Rizzo delivered a performance that belied her 17 years. She was wonderful in the role and her rendition of the excellent “There Are Worse Things I Could Do” was stunning.

“Beauty School Dropout” was show-stopping. The already camp number literally out-camped itself! Frenchy inexplicably doesn’t have her own number so it was great that she had a chance to shine here. Georgina Steggles was brilliant as the ditsy blonde (then pink) and was so fun to watch. Her commentary throughout the number was hilarious. Teen Angel Mark Shaun Walsh held his own however – even when he was again almost upstaged by two topless boys!

Director and choreographer Pollyann Tanner once again delivers the almost impossible by staging a full musical in two weeks, especially at this standard. The choreography especially was fantastic.

A special mention must go to the lighting. Colin Wood has designed a visual spectacle here. It was like the stage was a beautiful 50’s jukebox which was literally a feast for the eyes (even though we were almost blinded on the opening chord of “Grease”!).

All in all, a perfect “Summer Night”.

GREASE IS STILL THE WORD!