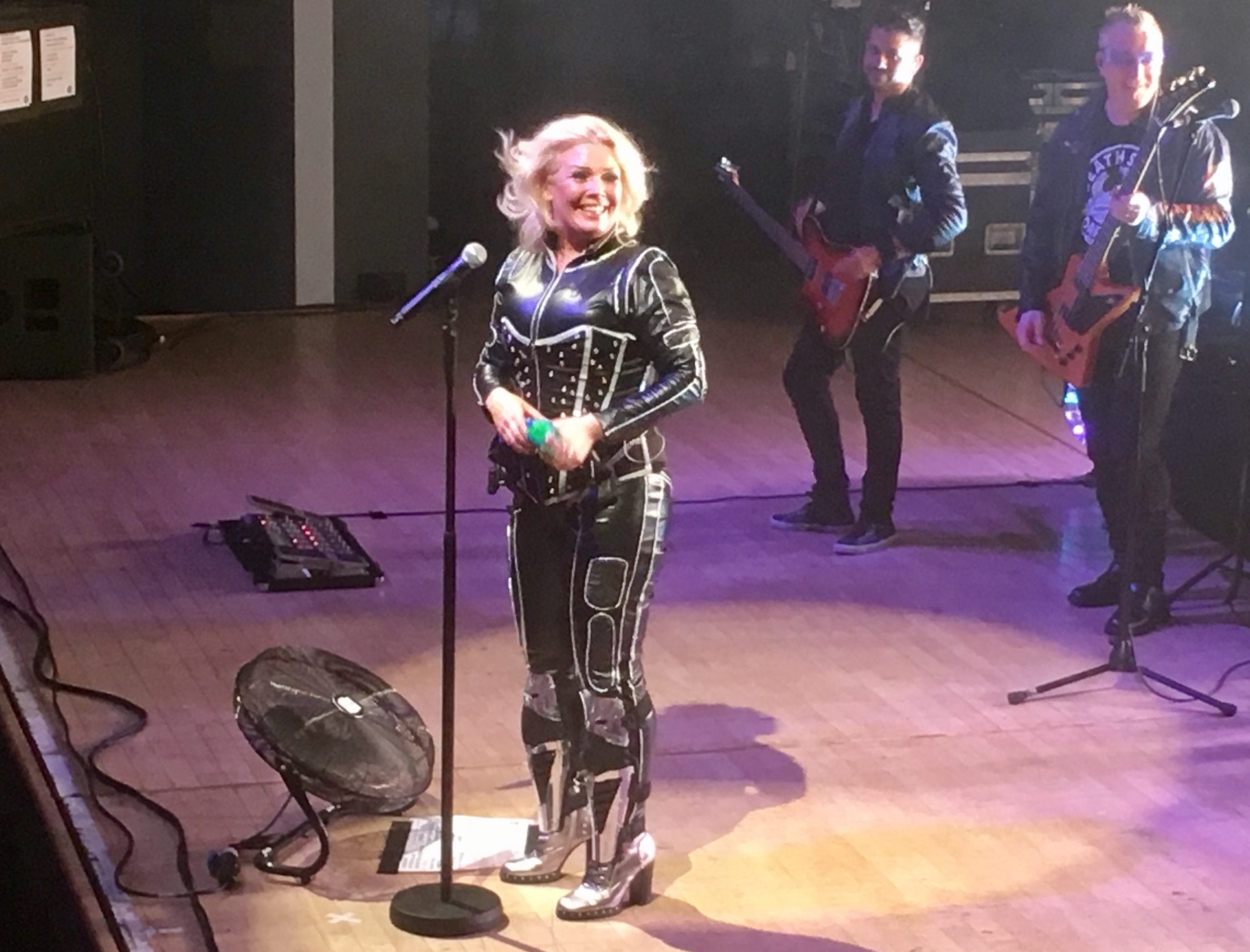 Kim Wilde is pop royalty. She was the most charted British female singer of the 80’s. She became an immediate worldwide star when she burst on to the music scene in 1981, had a US number one with “Keep Me Hangin’ On” (the last British female to do so until Leona Lewis two decades later)  and was hand-picked by Michael Jackson to support him on his “Bad” tour. The hits continued until she took a break in the mid 90’s (after a West End run in the musical “Tommy”) to get married, have two children, and somewhat randomly become a successful celebrity gardener! Following some headlining 80’s revival concert appearances she returned with the aptly titled “Never Say Never” album in 2006 and hasn’t stopped since.

There is huge nostalgia for 80’s pop star concerts which are immensely popular. Audiences relive their youth and great fun is had by all. This was in abundance this evening in Birmingham and testament to Kim’s popularity the beautiful Town Hall is completely sold out and full to the rafters. However, this isn’t just a throwback gig; it’s a very current concert which supports Kim’s brand new album “Here Come the Aliens”. The title comes from an apparent UFO encounter in her back garden. Whether you believe in such things is by the by but there genuinely may have been some extra terrestrial activity at play because Kim looks and sounds exactly the same as she did in the 80’s!

Bounding onto the stage in a figure hugging leather cat suit she was like a gorgeous rock chick on a space mission (later she even whipped out a ray gun to protect us from aliens during “1969” like a scene from Barbarella). The audience were very politely seated for the first two numbers but upon the opening guitar rift of “Never Trust a Stranger” they were up out of their seats and remained so for the duration (thank you Birmingham Town Hall, I know some venues ridiculously don’t allow this).

The show was a great mix of the old and new. The great thing was the old tracks sound just as good now and the new tracks sit just as well alongside them. The new album is fantastic. Aside from the fact it’s Kim Wilde, it’s also down to the fact that her musical powerhouse brother Ricky writes with her and produces her music, which he has since the beginning. This is very wise as it’s a winning formula and why the album put her back in the UK top 40 charts. This is very much a family affair with Kim’s niece (Ricky’s daughter) Scarlett on backing vocals and even Ricky’s wife Mandy running the merchandise! Scarlett also did the stunning artwork for “Here Come the Aliens”.

New single “Kandy Krush” is an instant Kim Wilde classic. Another highlight was “Bladerunner” from the 1984 “Teases and Dares” album. Had it been written a few years earlier it could easily have been on the soundtrack to the movie of the same name. Pop classic “You Came” was dedicated to the audience who were more than glad they did.

The encore had to be the iconic 80’s anthem “Kids in America” – a track which was way ahead of its time and amazingly was recorded by Kim when she was just 19 years old. It was electric to hear live. The band were awesome and made everything sound so good.

It’s been a while since Kim toured the UK. Let’s hope she doesn’t keep us hanging on so long next time!

Yours ’til the End

Another Step (Closer to You)

If I Can’t Have You

View from a Bridge

Keep Me Hangin’ On